RSS
← Sharing…
Turning Our Brokenness into a Support Channel for Others! → 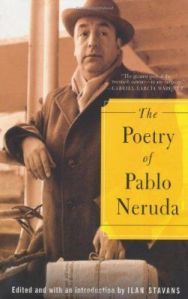 In honor of Pablo Neruda – my favorite poet. Some of the most romantic poems I’ve ever read are written by him. Neruda wrote in a variety of styles such as erotically charged love poems as in his collection Twenty Poems of Love and a Song of Despair, surrealist poems, historical epics, and overtly political manifestos. In 1971 Neruda won the Nobel Prize for Literature. Colombian novelist Gabriel García Márquez once called him “the greatest poet of the 20th century in any language.” Neruda always wrote in green ink as it was his personal color of hope.

Neruda was hospitalized with CANCER at the time of the Chilean coup d’état led by Augusto Pinochet. Three days after being hospitalized, Neruda died of heart failure. Already a legend in life, Neruda’s death reverberated around the world. Pinochet had denied permission to transform Neruda’s funeral into a public event. However, thousands of grieving Chileans disobeyed the curfew and crowded the streets.

Take bread away from me, if you wish,
take air away, but
do not take from me your laughter.

Do not take away the rose,
the lance flower that you pluck,
the water that suddenly
bursts forth in joy,
the sudden wave
of silver born in you.

My struggle is harsh and I come back
with eyes tired
at times from having seen
the unchanging earth,
but when your laughter enters
it rises to the sky seeking me
and it opens for me all
the doors of life.

My love, in the darkest
hour your laughter
opens, and if suddenly
you see my blood staining
the stones of the street,
laugh, because your laughter
will be for my hands
like a fresh sword.

Next to the sea in the autumn,
your laughter must raise
its foamy cascade,
and in the spring, love,
I want your laughter like
the flower I was waiting for,
the blue flower, the rose
of my echoing country.

Laugh at the night,
at the day, at the moon,
laugh at the twisted
streets of the island,
laugh at this clumsy
boy who loves you,
but when I open
my eyes and close them,
when my steps go,
when my steps return,
deny me bread, air,
light, spring,
but never your laughter
for I would die.

Posted by Yinka (Anthonia) Gansallo-Lawrence on October 16, 2014 in A little more kindness

← Sharing…
Turning Our Brokenness into a Support Channel for Others! →